Established in Geneva, the Louis-Jeantet Foundation commenced activities in 1983. Its history cannot be dissociated from the personality of its founder.

Having settled in Geneva since the mid 1930’s, Louis Jeantet, a French businessman with no direct heirs, decided to dedicate his fortune to biomedical research.

With the help and advice of some friends, he got down to drafting the articles of association of his future foundation, a task that occupied him for the last fifteen years of his life. The financier then nominated six men he deemed worthy of confidence – the six founding fathers – to set up his foundation posthumously.

Louis Jeantet has left both a financial and moral legacy to posterity. The Foundation endeavours to ensure the legacy is fully respected and that it bears the aspired fruit.

Louis Jeantet was born in Paris on 4 August 1897. His father Félix Jeantet, the French man of letters, had left his native Jura to set up home in the capital where he was the editor of the Revue Hebdomadaire.

Gifted in drawing, Louis Jeantet dreamed of becoming an architect, but the Great War upset the plans of this brilliant pupil. At the age of 17 he joined the French army in the Colonial Infantry. Awarded the Croix de guerre, he returned to France in 1920 with neither money nor a trade to go to.

He started out converting the surplus vehicles left by the American army in France for civilian use. Having become a major industrialist in the automotive business after the Great War, he obtained the sales representation for Firestone tyres across Europe. In 1924, Louis Jeantet married Simone Violet, joint owner of the company producing the Byrrh aperitif. The couple were childless.

Having moved into finance, Louis Jeantet left France for Geneva in 1936, where little by little he retired from public life to devote all his energy to managing his fortune.

From then on he lived discreetly, sharing his time between family, business and practising various sports – from car racing to the bobsleigh, and also nautical sports.

An officer in the Légion d’honneur, Louis Jeantet died of cancer in Geneva on 13 December 1981. 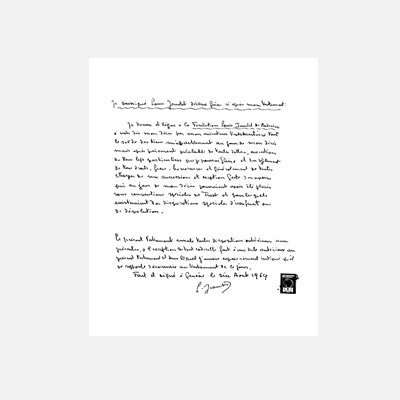