Established in 1986, the Louis-Jeantet Prizes are awarded each year to experienced researchers who have distinguished themselves in the field of biomedical research in one of the member states of the Council of Europe. They are not intended solely as the recognition of work that has been completed, but also to encourage the continuation of innovative research projects. The prizes are awarded to fully active researchers whose scientific efforts are focused on biomedical research.

At least one and at most three prizes are awarded each year. The sum currently available to each prize-winner amounts to CHF 500,000, of which CHF 450,000 are to be used for financing ongoing research and CHF 50,000 are given to the researcher personally. Since 1986, the Foundation awarded more than CHF 60m. to the 90 winners of the Louis-Jeantet Prizes for the continuation of their research.

The geographical distribution by country does not necessarily reflect the nationalities of the prize-winners – who can come from all over the world. It reflects the spread of the European centres of excellence in biomedical research.

The Foundation rewards excellence. Fourteen winners of the Louis-Jeantet Prizes have subsequently been distinguished by the Nobel Prizes in physiology or medicine, or in chemistry.

When the research being recognised is close to practical applications for combating illnesses affecting humankind, one of the Louis-Jeantet Prizes converts into a Jeantet-Collen Prize for Translational Medicine, supported by generous donations from the Désiré Collen Stichting. 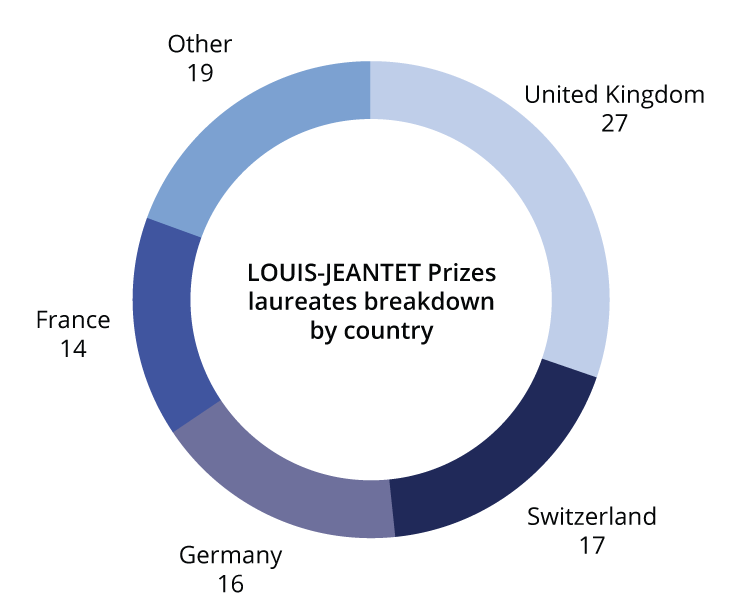